Burberry has once again pushed the boundaries of social engagement by sending over a million personalised thank you cards to each of its Twitter Followers.

To celebrate passing the one million followers mark, @Burberry has taken ownership of the #thanksamillion hash tag and is in the process of sending an animated ‘note’ to each of its fans.

The luxury British brand, which has 12 million ‘likes’ on Facebook, is at the forefront of pioneering creative campaigns amongst its online communities. In fact, Burberry was credited in Facebook’s initial public offering a few weeks ago to demonstrate that businesses are using the site for major product launches.

Christopher Bailey, the brand’s chief creative officer has described the brand as “as much a media-content company as a design company”. Last summer the fashion house used Facebook to launch its Body fragrance by sending 250,000 samples to users who ‘liked’ the page. At London Fashion Week 2011, Burberry teamed up with Twitter to launch Tweetwalk, and sent backstage Twitpics to followers whilst the brands Instagram account was taken over by photographer Mike Kus. At the same event the previous year the show was accompanied by a shoppable live stream.

Twitter allows brands to share exclusive content with a global, engaged audience and Burberry has certainly taken advantage of the power of social media to engage with potential customers in real-time. And it appears to be adopting new channels early to develop and maintain its carefully crafted online presence.

For example, it was one of the first luxury brands to take advantage of Google +, the account now has more than 800,000 g+s, and The Pinterest account includes 17 boards.

But when the line between social media and advertising becomes blurred, this groundbreaking approach comes at a cost. Burberry is currently facing legal action from the estate of Humphrey Bogart for using a photograph of the late star wearing a rain coat on Twitter and Facebook. Although this was ‘not directly connected to the sale of merchandise’, todays media landscape throws up questions as to where traditional marketing ends and customer relations begin. Is social networking advertising, PR, or a discipline which requires its own legal framework?

While Burberry does not peg its innovative social media activity directly to sales, its chief executive Angela Ahrendts has in the past attributed strong financial results to “continued investment in innovative design, digital marketing and retail strategies”.

We think Burberry is a shining example of a brand transcending real and virtual platforms to deliver an integrated message of luxury, desirability and creativity. So #thanksamillion Burberry for inspiring those in the creative industries to think outside the box! 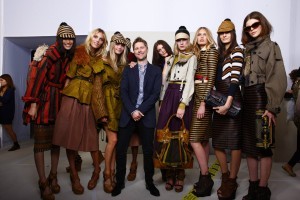