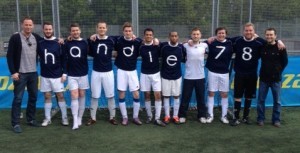 Last weekend, FC Handle took on some of the most well-known names in the UK’s broadcast industry to reach the final of the Broadcast Fives five-a-side football tournament.

The Cup, which is the biggest football event for the broadcast industry, was held in aid of The Vision Charity, which works with blind and visually impaired children.

Around 50 teams were competing for the title. And after a hotly contested final against Re:fine United, Handle lost 1-0.