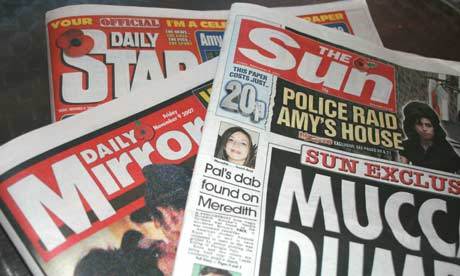 Last week we read an article in the Guardian about a senior News of the World executive accusing Broadsheet papers of "sneering at the working class" by dismissing celebrity exposés as "tabloid tittle-tattle" which isn’t in the public interest.  After going onto say that the phrase ‘tabloid press’ was another way of sneering at the working class, he argued that there was as much as journalistic value in writing about celebrities, as there was politics. Why? Because readers pay the wages of these people in the media spotlight.

Go into any office and you are just as likely to hear people talking about last night’s football or what’s happening on X-Factor as they are to be talking about the current economic crisis in Ireland, or the devastating news of the New Zealand mine blasts.

Popular culture may seem trivial by certain groups in society, but as the stats below show, it does by its nature, reflect what the consensus are interested in – lending validity to the NotW executive.  Nowadays, not just the traditional, but also the online media caters for all tastes and the fact that celebrity issues and their lives are such a big part of our culture just goes to show how relevant his comments are.

You only have to look at the ratings and circulation figures for ‘I’m a celebrity….’ or the latest edition of Heat magazine, to see that celebrity certainly is big business. Within the last couple of weeks, the collapse of Gillian McKeith prior to her bush tucker trial in the jungle drew 10.6 million viewers, compared to ITVs 9.4 million when the leaders’ debate was on in April - drawing only about 15% of the electorate.  Similarly a quick search on the ABC site which collates and publishes circulation figures shows that in the period Jan – June 2010 Newsweek’s average circulation was 189,922 compared to Heat magazine's 417,163

Despite the ratings, both popular and highbrow culture has their place/relevance and they are both reporting on issues which are relevant to their target audience.  Of course that may be political developments, national and international news but for others celebrity equals success and is therefore newsworthy, such as the news about how football players are behaving off the pitch.

Whilst these extra-curricular activities may not shape the future political environment or change the current economic climate, they may be issues which some can directly relate to, or simply offer a brief diversion from serious and sometimes negative news when we switch on the TV.

As if to provide us with further proof that there is a definite divide between the tabloid and broadsheet press, with a need (and a niche) for both, comes recent news from Radio 4.  In a controversial announcement popular-meets-highbrow culture, Katie Price is suggested as a potential guest editor for the Today programme. As a flagship for the channel they are taking a huge risk considering the established following and content of the programme.  A quick Twitter search reveals this (amongst many similar) comment “Please, please say it is not true that you are considering Katie Price as guest editor. Shocked and appalled of SW10”.

But for now perhaps the media executives should respectfully acknowledge the position one another’s publications  hold and in the meantime, the consumer can decide whether they want current affairs or to dip into some celebrity glitz and glamour and escape for a while. What’s your view?