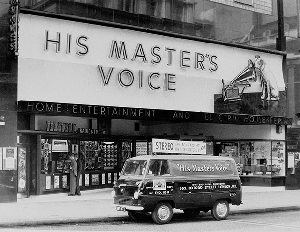 According to unconfirmed reports, HMV is poised to return to its original home in Oxford Street just two months after being rescued out of administration. But does this decision mark a wider trend in multi-channel retail strategy?

The composer Sir Edward Elgar opened the first ‘His Master’s Voice’ shop at the site in 1921 – indeed a plaque marking the “world’s most famous music store” is still there. HMV is understood to have exchanged contracts on the store’s lease, subject to landlord approval. The retailer is also said to be considering leaving its 150 Oxford Street store, which at 58,000 square feet may be too big for its requirements.

We have previously blogged on the value of brand heritage, and HMV’s alleged move to its original unit confirms the theory that the history of a company is a powerful marketing tool. Despite plans to re-launch HMV’s website in the autumn and the realisation that its current building may be too large for its needs, restructuring experts at HMV owner Hilco seemingly understand the value of a ‘clicks and mortar’ approach to retail.

Meanwhile, according to separate reports, Macy’s CEO Terry Lundgrend told investors earlier this month that; “The way the customer is shopping today is very blurred between store experience and online experience. We wouldn’t have the multibillion dot-com business if we didn’t have Macy’s stores. I think we’d do a fraction of the business online if we didn’t have the store experience. I passionately believe more pure-play online businesses will be opening stores.”

Rumour even has it that online giant Amazon is actively exploring a store concept. And it seems it is not alone in its aspirations. According to the report Multi-Channel Matters: A route to next generation retailing from independent think tank FreshMinds, retailers are increasingly recognising the necessity of a multi-channel strategy. The report has found that 69% believe that having such an operation is ‘very important' or ‘essential' to their business and 25% think that the biggest growth opportunity for their organisation is establishing new channels to market. Of the retailers who consider high street channels an important growth area, 48% stated that they do so because it is good for their brand presence.

So it seems that despite frequent reports on the death of the highstreet, online brands are beginning to realise the benefits of offering a physical retail experience. The rise of ecommerce is undisputable, but the future looks bright for professionals who understand the value of offline relationships and recognise the equity in face-to-face customer service.

What are your thoughts? Let us know by commenting below.